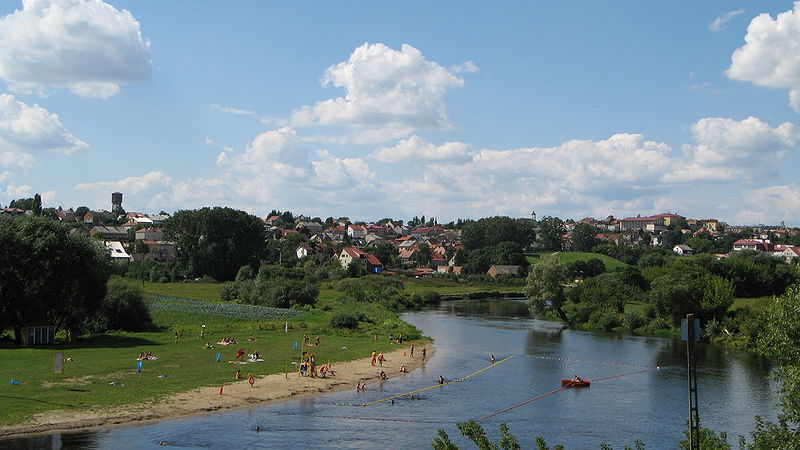 Łomża is located on the river Narew and – along with its upland – in the area of the northeastern part of the country called “The Green Lungs of Poland”, an area that belongs to the few, yet unspoilt, natural areas of Europe and possesses unique landscape values.

Łomża occurred in the 10th year. at a distance of approx. 5 km east of the current town center, on the steep banks of the Narew River Valley. Significant remnants of buildings and defense facilities from this first period can be found on the two mounds called Queen Bonas High and St. Wawrzyniec, respectively.‘s High. The city was moved to its present location in the second half of the 14th century.
After the death of the last Masovian prince and after Mazowsze was placed under the Polish crown in 1526, Łomża became a royal city. The biggest boom was in the 15th and 16th centuries.
Łomża was on the Narew-Wisła river route and had a harbor and 6 bridges. The city was surrounded by ramparts. From Łomża, important trade routes went to Prusy, Wilno, Russia and to Western Europe. The city was a center for trade, crafts as well as local and regional administration. In the middle of the 16th century. the city numbered 3300 inhabitants, over 540 houses, and 7 churches; it had a royal courtyard, a bronze foundry, armory, bathhouses, cereal warehouses, salt warehouses and other buildings. From the middle of the 17th century. followed a downturn for the city, caused by the wars with Sweden as well as by numerous fires and natural disasters.
During Poland's division, Łomża came under Russia. A rapid development of the city took place in the years 1867-1915, when Łomża had become the capital of the Łomża government and thus the seat of both government, district and city government; World War I slowed this development.
World War II brought great destruction; about 70% of the city was ruined. As a result of deportations and killings, the population decreased by about 60%. Łomża was freed on the 13th of sept. 1944th
In the years 1946-1975, the oldest part of Łomża was rebuilt and during the same period several new living quarters were built. In 1975, the city became the capital of Łomża County, a function that lasted until 31.12.1998.1978-1990, there was a tremendous growth, both commercially and in terms of housing construction. New living quarters emerged. 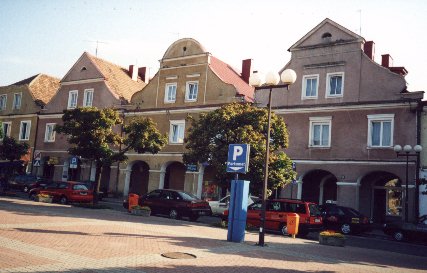 Houses on the old square in Łomża

Church of Saint Michael the Archangel (Kościół Św. Michała Archanioła)
The construction of this church began before 1504. The construction was financed by Princess Anna Mazowiecka and her sons: Janusz and Stanisław. The church is bedotic with baroque elements on the facade. The building is the wooden ship with lower side ships. The windows are pointed arched with stained glass windows. There are many burial sites in the interior of the church. The church (cathedral) is built entirely of bricks. The building length is 53 m. And the width 23 m .; the main ship is 17 m high and the side ships 13 m.

Church of the Benedictine Order and Nunnery
The Benedictine Order came to Łomża (from Toruń) in 1627. This church was built 1857-63. Its interior is the wooden ship with separate choir. There is a Neoromanian marble altar. Several pictures are seen in the church, thus a depiction of the Virgin Mary from the middle of the 17th century. The monastery is erected next to the church.

Church of the Capuchin Order
This church, dedicated to the Suffering Mother of God, was built 1781-98. The church contains a Late Baroque main altar and three lateral altars, also in Late Baroque style. The facade is flat and three-part. In the square in front of the facade stands a figure of the Mother of God from Częstochowa (Ferdynand Jarocha, 1966).

Museum of the Northern Mazowsze (Muzeum Północno-Mazowieckie)
The museum contains both ethnographic and archaeological collections. There is also an interesting amber collection. Here amber finds from the area around Narew are exhibited’s middle race; to use the term: The collection of amber from Kurpie. (“Kurpie” is the name of the ethnographic region around Łomża and Ostrołęka; the population is called “kurpiowie”). It is the largest regional collection of its kind in Poland and quite unique with a rich documentation of amber history and our knowledge of amber.
The archaeological collections describe the history of the former Łomża county from the ancient Stone Age to the late Middle Ages. The found objects from the Stone Age come from random finds; this is about about arrowheads of flint from the late Stone Age, tools from the Middle Stone Age, several axes from the younger Stone Age, etc.
The historical collection includes museum objects of various kinds: archives, pictures and postcards, maps, books, newspapers, schoolbooks, military items, utensils, technical devices, etc.

Łomża is located on a beautiful cliff, surrounded by swampy areas with a very special flora and fauna. To the southeast, the city is next door to a nature reserve that laid the foundation for the creation of the Łomża Landscape Park / Narew Valley. The city is an excellent base and starting point for those who know how to appreciate unique scenery.

Nowogród .
Nowogród is a small town located 16 km northwest of Łomża on the rivers Pisa and Narew’s confluence. In the city there is a very interesting open-air museum “Skansen Kurpiowski”. (Kurpiowie is – as mentioned above – the designation of the indigenous population of the original Mazowsze region, around the Narew River and its tributaries). The open-air museum has the character of an ethnographic park. Here, traditional wooden buildings are presented based on the local landscape. These are mainly buildings from the 19th century: country huts, farms, log houses, windmill, rocker, smithy, watermill etc. In the forest run house you can see a collection of folk costumes from the Kurpie area.

Booking.com
Lomza (The city's official site is available in versions in a total of 104 languages) (see below) – with practical information for tourists

Lomza (The official site of the city is available in versions in a total of 103 languages !!!. That is all European languages (including English, German, French and all the Nordic languages) as well as many African and Asian languages). 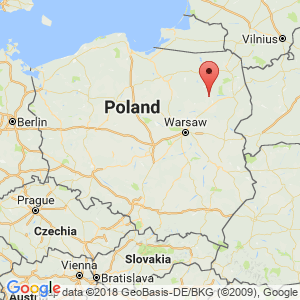