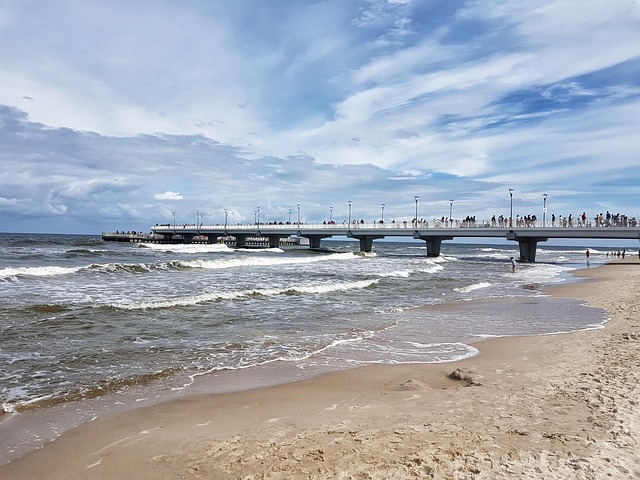 The mill in Kołobrzeg. – Picture of Przemysław Krzak from Pixabay

Kołobrzeg is located at the mouth of the Parsęta River in the Baltic Sea and is – after Gdańsk / Gdynia – the largest Polish city located directly by the sea.
Kołobrzeg is one of the oldest cities in Pomerania. Since the end of the Bronze Age, several tribes have inhabited the area. The archaeologists have found traces of buildings from the 6th and 7th centuries, including. at the place where Kołobrzeg’s old town now lies. In the 9th year. a fortress was erected at the mouth of Parsęta and in the year 1000 a bishopric was established here. After the town was granted commercial property rights in 1266, it was developed and expanded into a significant commercial city. In connection with the development of the city, salt production was very important. At the beginning of the 14th century. entered the city in the Hanseatic League.
In the course of time, Kołobrzeg has been in Polish, Swedish and German hands.
By the end of World War II, the majority of the city (about 85%) was destroyed; it was rebuilt following government decisions in 1950’s.
In the middle of the 19th century. they began to expand the harbor and build health care facilities. salt baths. Kołobrzeg is a freight and traffic port with connections to, among other things. Scandinavia and Bornholm. The town is home to the Polska luegluga Bałtycka (Polish Baltic Sea Shipping Company). 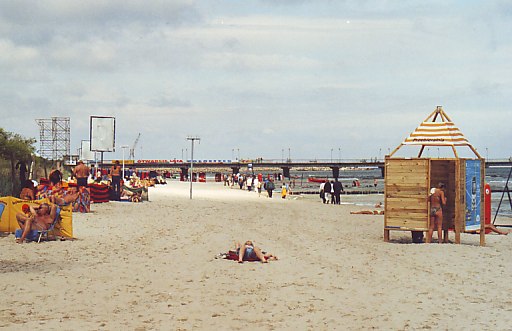 The beach at Kołobrzeg

Among others: the 14th-century Mary Church, the New Gothic City Hall, “Powder Tower” from the 15th century, the old execution site, the salt water source in Źródlana street and the medieval salt mines.
Cozy and beautiful shops, cafés and restaurants give the old town center new life. The long (6 km) and wide sandy beach is one of the most beautiful on the Baltic Sea. The lighthouse and the 220 m long pier are frequently visited by tourists.
Kołobrzeg is an ideal destination for both a beach holiday and a spa stay.

The Most Holy Virgin Mary's Ascension Cathedral or Maria Basilica
is a Gothic-style five-ship hall church, built in the 14th century. From 1972, the church's cathedral in Koszalin-Kołobrzeg is founded. The date of construction cannot be precisely determined, but it is believed that construction of the parish church in Kołobrzeg was begun in the early 14th century. at the site of the former St. Nicholas Church. Towards the end of the 15th century. the northern and southern tower were connected to a large tower block by walling the residence between them. At the same time, the center section was fitted with a tower helmet, giving the tower section the current appearance. In 1945, during the battles over Festung Kolberg, the church building was an important part of the city's defense; in this connection, the building was destroyed by Soviet artillery fire. In 1957, reconstruction began. After part of the building had been converted into a museum, the entire church was put into service in 1974. In 1979, the church was again renamed the Collegiate Church. 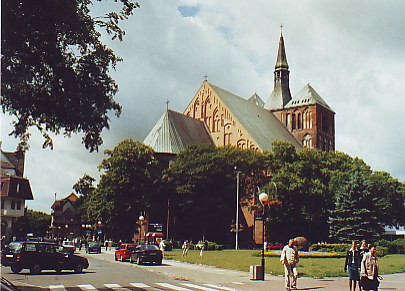 St. John the Baptist Church (Kościół św.Jana Chrzciciela)
In Kołobrzeg-Budzistowo lies the Church of St. John the Baptist, mentioned in the written sources of 1222. The church is the only building memorial to the early medieval Kołobrzeg as well as the oldest brick-built church in central Pomerania. The district of Budzistowo is located south of the current old town. Here, along the eastern bank of the Parsęta River, lay the oldest settlement; then it was built further north, but still east of the river, where the city center is now. The church was founded by Princess Mirosława, married to West Pomeranian Prince Bogusław II. The building is in Romanesque style with apse facing east. Later, however, the church was expanded a lot and now appears as a Gothic building. Originally, the northern church door was reserved for women, while the other was intended for men.

Powder Tower (Baszta Prochowa)
At the Dubois Street in the Old Town you will find the Powder Tower. It is the only preserved part of the medieval defenses. The tower is very high, with 4 floors. The walls are adorned with several glare.
The original name of the tower was Baszta Lontowa, but the name was changed after World War II. Another Powder Tower was found on the present streets of Cathedral and Rzeczna, but it was destroyed by a gunpowder explosion in 1652.
The tower now houses a branch of the Polish Tourism and Homeland Science Society.

The lighthouse (Latarnia mosaic)
The Kolobrzeg Lighthouse is located on the Baltic Sea coast between the lighthouses of Niechorze (34 km to the southwest) and Gąski (22 km to the northeast). The lighthouse is managed by the Maritime Directorate of Słupsk, and visitors are accessible. The use of navigation lights in this place began in 1666. In the following centuries, various buildings were used as lighthouses. In 1909 a light half-timbered building was replaced by a more solid brick building. The range of light reached 12 nautical miles and the gas light was at a height of 25 meters. In 1945, the Germans blew this lighthouse into the air as it was used as a point of reference by the Polish forces during the fighting on Kołobrzeg. Shortly after the end of the war, a new lighthouse was built; the disused lighthouse had stood in front of the fortifications; the building of the new tower used the fortress itself as a foundation. The current lighthouse is 26 m high and the height of the light above the sea is 36.5 m. The reach of the light is 16 nautical miles (29.6 km).

The port of Kołobrzeg
The port areas are located along both banks of the Parsęta River. On the right-hand side is the trading port and the jetty for passenger ships. The harbor can be accessed by vessels of up to 4.5 meters depth. The breakwaters at the entrance to the port are under development to make the port even more secure and accessible to even more ships. On the island of Solna lies the marina and on the left bank the fishing port and the war harbor. The fishing fleet in Kołobrzeg comprises 114 boats. 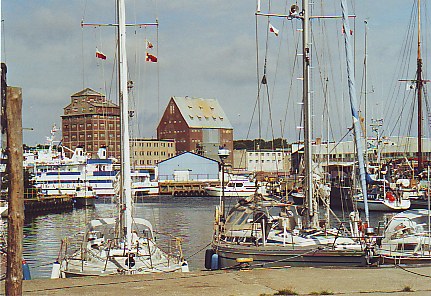 Town Hall (Ratusz Miejski)
Throughout the centuries, the town hall was a citizen's fortress and the city's business card. A town hall building dates back to 1380. The Hanseatic town halls were often splendid buildings to testify to the wealth and ambition of the cities. During a siege in 1807, the original Gothic town hall was destroyed and it was considered to completely demolish it. However, this did not happen, it preserved what could be preserved to bear testimony to posterity about the values of the past. The new town hall was built in 1829-32 by drawings by renowned architect Karl Friedrich Schinkel. The neo-Gothic building was created in accordance with nineteenth-century enthusiasm for romance and the Middle Ages. The town hall looks like a medieval castle: towers, masonry roofs and slates could point to a defensive use of the building. In the basement below the town hall, where the Gothic vaults are preserved, there is a music café. Visitors should note the remains of the former medieval building preserved, especially its northeastern corner. 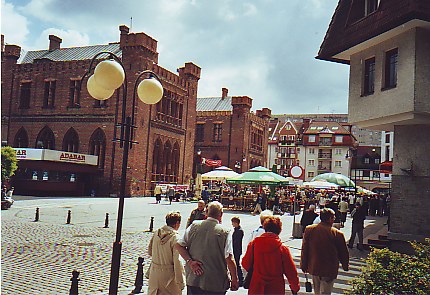 Medieval stone houses
Of these, in particular, the house should be mentioned by ul.Gierczak no. 5, which was built in the 15th century, but later rebuilt. The house was damaged during World War II, but rebuilt in 1960’s.

Parker
Kołobrzeg is a city with many parks, where you can walk for hours and enjoy the green surroundings.

The Memorial of Poland's Marriage with the Sea (Pomnik Zaślubin Polski z Morzem)
stands by the promenade along the sea and was unveiled on November 3, 1963. The idea is to celebrate Poland's access to the sea after World War II. The main element of the memorial is a stylized flag; other elements symbolize Poland's presence in Pomerania for a thousand years, others refer to the army units that liberated the city in 1945; finally, there are symbols for it “the window to the world”, i.e. the city's harbor. 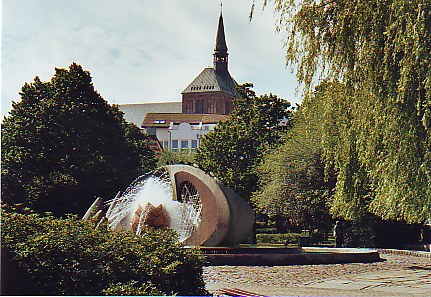 Kolobrzeg. A green area in the center with the church of Mary in the background

The fortress of Kołobrzeg
Before Kołobrzeg became a health resort, it was a fortified city. In 1627, the first fortification was built by the estuary guarding the entrance to the harbor. Later, the Prussians built a more comprehensive system of fortifications with bastions, redouts (closed armor), ravel lines (outskirts, surrounded by tombs) and lynchets (open armies). Later, a solid, round fort with thick walls was erected on whose upper platform stood cannons that had the entire port area within firing range. From here, the city was defended under the siege of the Russians. Thus, in 1807 there were fierce battles around Fort Wilczy. The largest fortifications were built in the 17th and 19th centuries, some of which are preserved to this day. Best known is Fort Ujście with the lighthouse. On the left side of the canal, just opposite Fort Ujście, you can see Fort Kleist. The well-preserved Redoute Morast is found on the island of Solna, by the marina and nearby, by the Drzewny Canal, another redoute is found: Solna. At the former Fort Wilczy (ul.Fredry) there is now amphitheater. Fragments of fortifications from the 18th century. as well as ramparts, winding paths and foundations for bastions can be seen in Henryk Dąbrowski Park.

The Polish Weapons Museum (Muzeum Oręża Polskiego) The museum includes the period from the Middle Ages to the present and its exhibits contain interesting examples of weapons, uniforms and other military items.

Fishing
In order to fish in the sea, you need to buy a fishing license at the port office. Within Kołobrzeg, the sea includes the river Parsęta’s and the Drzewny Canal outlet in the Baltic Sea, from the railway bridges in the city. You can also fish from the breakwater at the harbor, the promenade and the pier at the sanatorium Arka.

Kurbyen Kołobrzeg
Kołobrzeg has won recognition as one of the best and biggest health resorts. In addition to the disease-fighting cures with mineral baths and the like, which can be reviewed, the air content of iodine and salt itself is also health-giving.
More than 150 years ago, the first cure sites were established. The forms of treatment available in Kołobrzeg are salt baths, carbonated baths, steam baths, inhalation (individually or for groups). Mud from the Kołobrzeg area has been studied and is now being used for healing purposes (mud baths). In Kołobrzeg, drinking cures (sheep whey, milk, mineral water) are also used. began to use filtered seawater in the drinking courses.
The courier business has a considerable scope today. Dozens of health care facilities together have approx. 7000 beds. The disorders that are primarily addressed in this spa town are: respiratory diseases, cardiovascular diseases, movement disorders and metabolic disorders (including diabetes). In children, one seeks to remedy diseases of the respiratory system, obesity, diabetes and skin diseases. 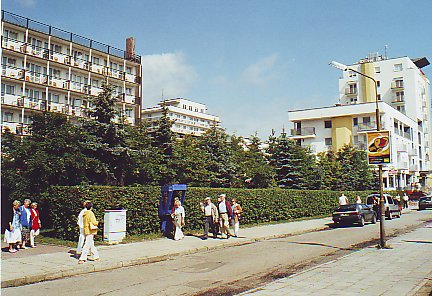 Street in the spa town with hotels and sanatoriums

Both freshwater fishing (river Parsęta) and coastal fishing are possible.
13 km to the east lies the seaside resort Ustronie Morskie .

There is a ship connection from Nexø to Kołobrzeg. 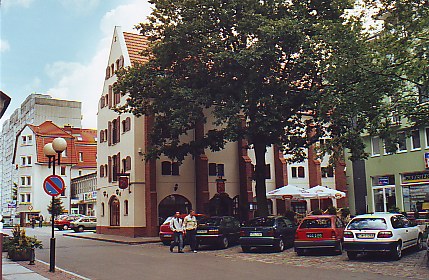 Party from the inner city of Kołobrzeg 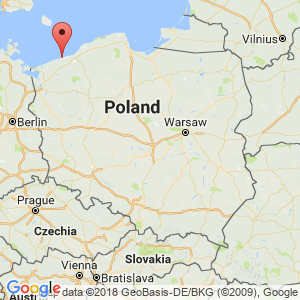