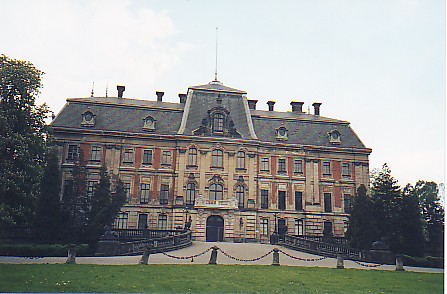 The castle in Pszczyna, seen from the castle park.

Pszczyna is located south of the Katowice area and north of the western Beskidy Mountains.
Historically, the city has emerged by virtue of its location on an old trade route that went from Krakow to Silesia and from here via Cieszyn to southern Europe. The area around Pszczyna was originally part of Małopolska, but from 1178 became part of Silesia. The town's history dates back to the transition between the 13th and 14th centuries. At that time, there was a castle here, surrounded by ramparts and moat. The town of Pszczyna first belonged to the princes of Opole-Racibórz, since a transition under Czech princes. From the middle of the 16th to the middle of the 18th century. owned the town of the Silesian genus Promnitz. Following a 1921 referendum, the Pszczyna area returned to Poland in 1922. 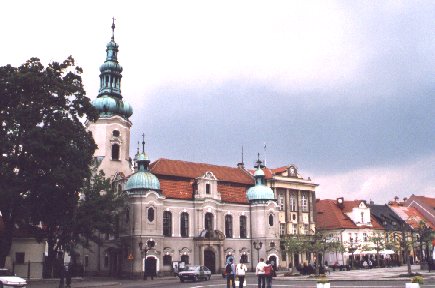 The square with the evangelical church and the town hall

The first castle in Pszczyna. (See the image at the top of the page).
The first castle in Pszczyna was built in the 11th or 12th century. of the princes of the Piast genus, but only in the 15th century. a well-walled castle was erected here. This building has been expanded and remodeled several times. The most recent rebuild – as a French neo-Baroque mansion – took place in 1870-76. The surrounding park (from the 2nd half of the 18th century) is over 80 ha and was built in English style 150 years ago. In 1704-1707, the Baroque composer Georg Philipp Telemann was court chaplain and organist at the castle. Since 1946, the castle has been a museum.

Square.
The city's central main square is one of the oldest and most beautiful squares in southern Poland. The site's medieval design is preserved and the square is surrounded by beautifully renovated houses from the 18th and 19th centuries. Along the square lies, among other things. the castle's guard building, the evangelical church and the town hall.

City Hall.
The neo-Renaissance-style town hall stands on the square next to the evangelical church. The City Council bought the building in 1716 and after certain redevelopments it has served as a town hall ever since. The ground floor is probably from 1658. In 1861 the town hall was expanded and a third floor was added. The most recent building changes took place in 1931.

The Catholic Church (All Saints' Church) .
The Catholic parish church in Pszczyna is mentioned in the historical chronicles as early as 1326. The church was damaged by fires in 1622 and 1748. The building was each rebuilt and renovated several times over time. It now appears in Baroque style. On the south side is a rectangular chapel under which there is a crypt.

The guardhouse and Brama Wybrańców.
One of the oldest of the historic buildings of Pszczyna, which is preserved in its original form, is the guard building with the gate to the castle square. The house was built in 1687 by Consilius, the architect behind the reconstruction of the castle in the late Renaissance style. The building is adorned with the coat of arms of the Promnitz family, as well as an inscription in Latin which reads in translation: “The almighty creator of heaven, earth and sea protect this gate with its guard”. The gate is called “Brama Wybrańców”, of the word “wybraniec“which here means ‘one selected peasant soldier’; namely, it was traditionally local peasants, enlisted in the army, to do guard duty at the castle. Farmers from Pszczyna guarded the castle until 1875. 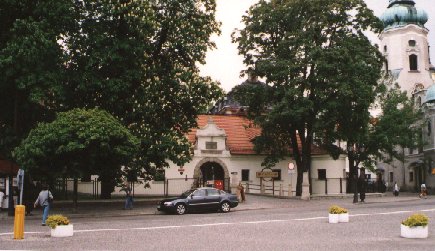 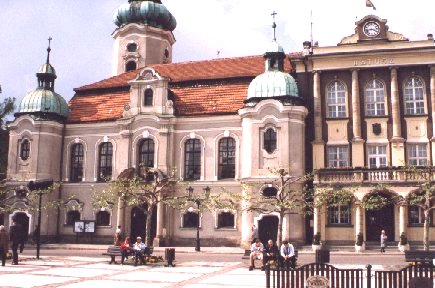 Booking.com
Pszczyna (The official site of the city in Polish and English) 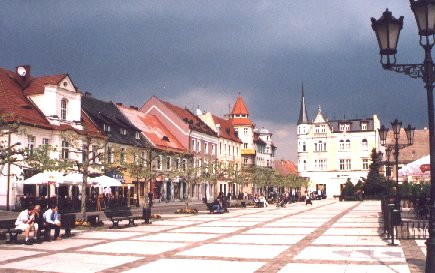 The square of Pszczyna 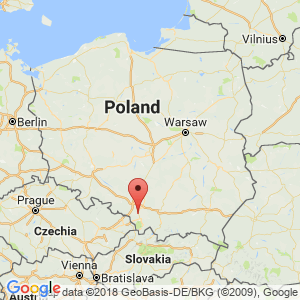