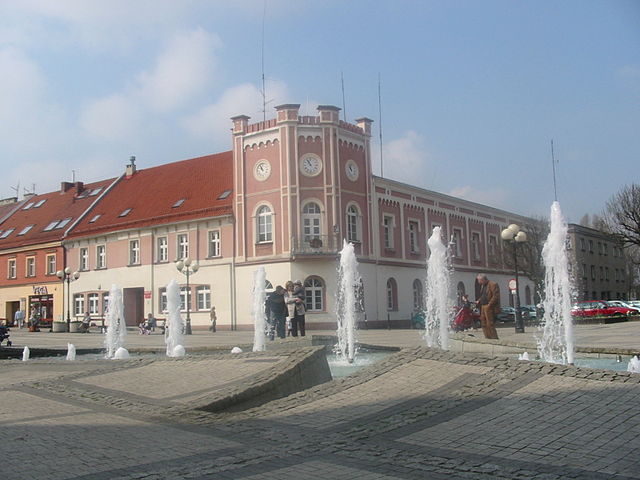 The square and the town hall of Mikołów. Photo by: anonymous, PLMikolow MarketPlace, CC BY-SA 3.0

Mikołów is located in southern Poland, on the southern outskirts of the Katowice area (Silesia), southwest of the capital Katowice.

A 1222 document mentions a castle of Andrzej of Mikołów. Ie that at that time there already existed a fort or castle on the site, which was the seat of a princely official, from which defense and judicial affairs were governed and where some civil administration took place. The first church in Mikołów was dedicated to St. Mikołaj.
In the middle of the 13th century. diminished Mikołów’s significance while the city of Pszczyna’s reputation grew. Pszczyna also moved the administration of the district (the castle).
The development of the first settlement, named Mikołów, eventually stopped, but at the same time a new town grew up on the other side of the Jamna basin. This new city became the center of present-day Mikołów. The first church in the new city was St. Wojciech’s Church.
Mikołów was a privately owned town run by a city bailiff. In the 14th century. the city came under Czech rule and therefore remained in the 16th century. part of the Habsburg monarchy. The plague “The black Death” ravaged the city in 1349-50, destroying 1/3 of the city's inhabitants.
In 1547, Mikołów was granted commercial property rights by Jan Turzo, the owner of Pszczyna, according to which a four-member city council emerged, one of which served as mayor.
As a result of the Silesian wars, Mikołów came under Prussian rule in 1742 – and remained there until 1918. In the 18th century. Mikołów was affected by both the destruction of the war and a great fire.
From 1808 Mikołów ceased to be a private city, ie. local self-government was introduced. In the middle of the 19th century. arose the first industrial companies in the city, primarily in the metal and mechanical industries. The first iron foundry started its business in 1842, to which others came later. A paper mill was built in 1862; it still works today. Other examples of early businesses are the brewery and the brickworks. Some mining also began in the second half of the 19th century. A new town hall was created in 1872. A number of middle school type schools emerged for both girls and boys. Here they built on the knowledge acquired in primary school.
After World War I, in 1922, Mikołów found himself together in Upper Silesia within the borders of the new Polish Republic. The occupation during World War II had tragic consequences for many of the inhabitants. When the Soviet army entered the city in January 1945, it was not only a liberation, but also the beginning of new assaults, now from the Soviet side.
After the war, business slowly started again and the school system was expanded. In 1999, Mikołów became the capital of the district of the same name.

Saint Wojciech’s and Godmother of the Church of the Snow
(Sognekirke). The first church was built in 1260-1270, but later rebuilt in the Gothic style.

Mikołów – in Polish, English and German 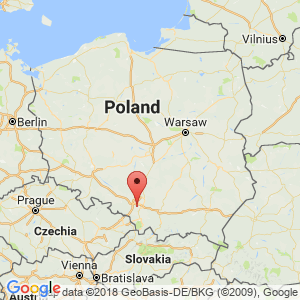