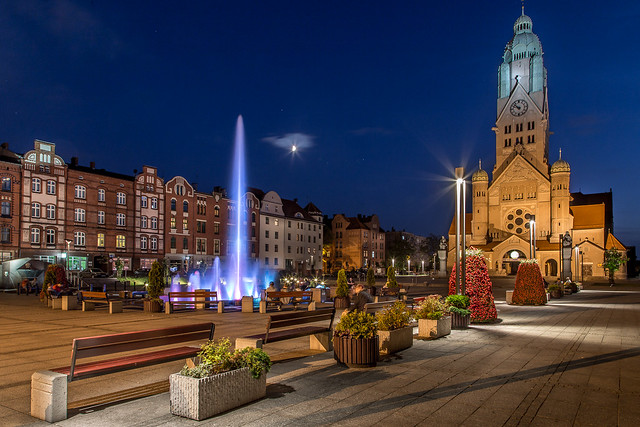 The Church of the Holy Apostle Paul in the square in the Nowy Bytom district of Ruda skaląska. – Photo by: Fryncita on Flickr

Ruda Śląska is located in southern Poland, in the western part of the large urban agglomeration, called the Katowice area. Neighboring towns are Mikołów, Gliwice, Zabrze, Bytom, Chorzów and Katowice. Through the southern districts, the A4 (E40) motorway connecting Poland's western border with Germany to the eastern border with Ukraine runs. The north-southbound main artery is the street ul. 1 May. The nearest airport is at Katowice, namely Pyrzowice in the northern part of the Katowice area at a distance of 35 km from Ruda Śląska.
The name “Ruda” means “ore” and refers to the iron ore previously mined in this area. Ruda existed as a village as early as 1243. In the second half of the 17th century. coal deposits were discovered in Ruda and its surroundings. This led to the construction of an extensive mining industry in the area. Until 1950, the present urban area consisted of several independent settlements. First, these were gathered in two cities: Ruda and Nowy Bytom, which in 1959 were brought together to the city of Ruda Śląska, which consists of 11 districts. Despite the fact that Ruda skaląska is a prominent industrial and mining town, there are also many green areas: parks, squares and forests.

The shaft tower at the mine shaft “Andrzej” (Szyb “Andrzej”)
is a protected shaft tower serving the former mine shaft. The tower stands on the street Odrodzenia in the district of Wirek .. This tower, which has become a symbol of the city, is the only tower of this kind in Silesia, which has the appearance of a medieval defense tower. In 1870, the construction of the square shaft tower began with its function as a lift tower for the then mine. “Gottessegen”. The tower is 23.4 m high (formerly 28 m). The side of the square foundation is 14 m., While the thickness of the brick wall on the lower part is 130 cm. In 1969 the work in the mine was stopped and in 1976 the shaft was thrown.

The shaft tower at the mine shaft “Mikołaj” (Szyb ,, Mikołaj”)
“Mikołaj” is unlike the tower “Andrzej” a typical open steel structure; it was built in 1912 as part of the mine “Wolfgang” in Ruda. In addition to the elevator tower, the other underground facilities belonging to the mine were also erected. Later in 1912, the mine was removed “Wolfgang” separate a separate mining company, “Count Franz”, in which “Mikołaj” were included. The shaft was deepened several times; in 1912 the depth was 445 m, in 1966 it reached a depth of 800 m. In 1997 the mining company named after the war “Wawel”, discontinued.

Mother of God from Lourdes’ Church
in the district of Kochłowice was consecrated in 1806. The church, erected on the site of a former wooden church, is a Late Baroque-style ground-walled building. The church stands in the center of the former village, now part of the town of Ruda skaląska. The valuable furniture comes mainly from the former church, including the pulpit in wood, the choir bar, the 300-year-old organ with eight voices, the stone font, etc.

Ruda Śląska (in English, Polish, German and French) – with practical information for tourists 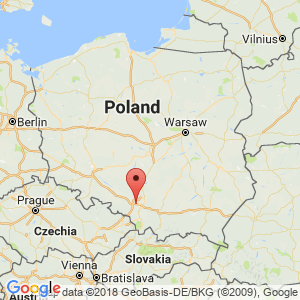