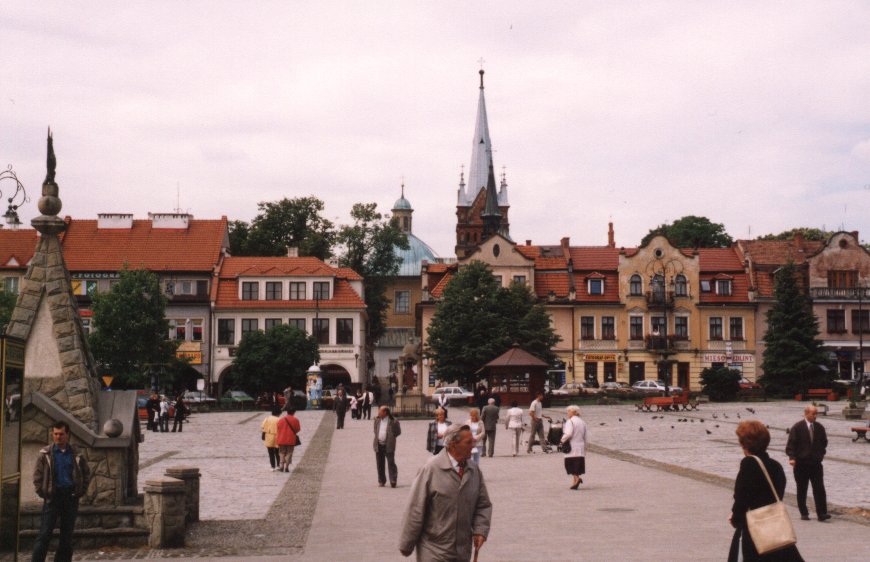 Myślenice is located 30 km south of Kraków, in the Raba River Valley, just north of the Beskid Makowski mountain range. Through the eastern part of the city, the highway # 7 (E77 – popularly called “Zakopianka”) connecting Kraków with respectively. the Slovak border at Chyżne and Zakopane.
A settlement named Mislimich is known from the 13th century, while the name Myslenice was first mentioned in 1301. -The town, which emerged on an old trade route from Kraków to Hungary, was granted commercial rights by King Kazimierz the Great in 1342. – I the 15th year. King Władysław Jagiełło visited Myślenice several times, in March 1424, where he among other things. met with the Danish king Erik (VII) of Pomerania, who was invited to the solemnity of the coronation of Jagiełło’s 4th wife, Zofia Holszańska. -The town lived to a large extent by trade, but over time many crafts as well as small industries, especially glass making, were added. – After the partition of Poland in 1773, Myślenice, like the rest of the Kraków area, came under Austria-Hungary. – During the period between World War I and World War II, the suburb of Zarabie developed as a health resort. – After World War II, the industry developed, especially the manufacture of clothing, metal products and galant products. The city is the administrative center of Myślenice District. 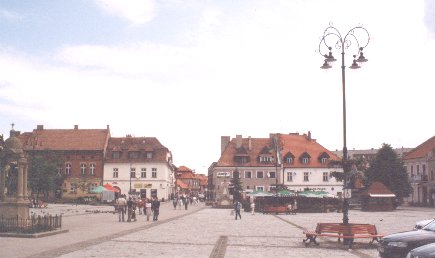 Square.
In the square you can still see the original, medieval town planning. There are also several townhouses from the transition between the 18th and 19th century, including the town hall. These buildings are subject to strict conservation regulations.
The Greek House.
Close to the square stands Dom Grecki (The Greek House), a former town pub from the 18th century. in Baroque-classicist style, now regional museum.
The parish church.
Near the square stands the Gothic Parish Church of 1465 with an early Baroque-style chapel from 1642. Here is the picture Godmother of Myślenice from the 16th century. The church is a pilgrimage destination.
St. James's Church
in the district of Stradom south of the center is Gothic style, built in the middle of the 15th century.
Borgen.
On the ridge Uklejna, approx. 1.5 km from the city center, the ruins of a castle from the 13th century can be seen. From the suburb of Zarabie you can reach the castle by following the red tourist path.
Zarabie
is the recreation district of Myślenice. The picturesque Raba Valley and the pure water of the river form the backdrop for numerous holiday activities: Here are excellent swimming beaches, tennis courts, mini golf, skittles, beach volleyball and basketball courts etc. as well as accommodation and dining options at various price levels. From here, a cable car leads up to the mountain of Chełm. From the view tower on the mountain top you can admire the mountain view to the east, south and west; From favorable weather conditions one can see Tatry and Kraków from here.
Mountain biking.
South of the city, on and around Mount Chełm, there are marked bike paths stretching over 30 km in total. The route is of varying difficulty. The cable car that leads up the mountain can cause bikes.
Fishing.
Fly fishing for brook trout is allowed in several places on the River Raba.
Riding.
In Zarabie there is a riding school that has a number of horses of the Hucul breed. 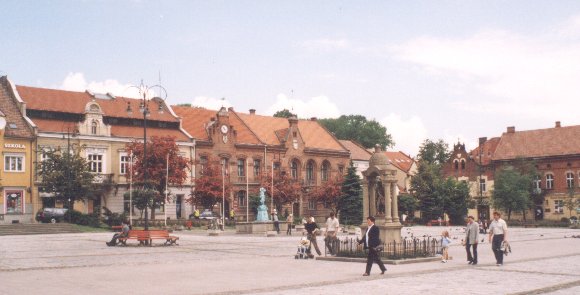 From the square. In the middle of the picture is the town hall

Myślenice – with practical information for tourists 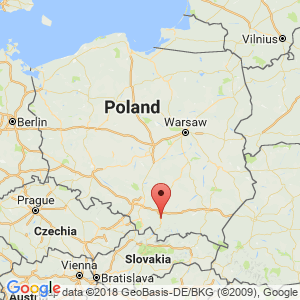