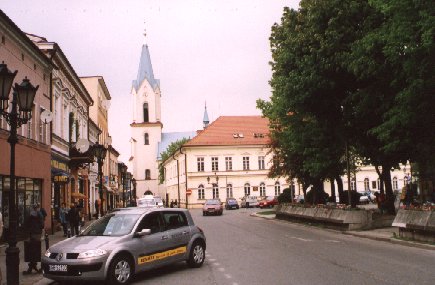 Oświęcim. From the main square. In the background, the house of the barlebarski family from the beginning of the 19th century, now the seat of the District Court.

Oświęcim is located on both sides of the Soła River, just before its exit in Wisła. To the north and northwest extend the extensive and concentrated industrial and urban area, known as the Katowice area, to the east lies the metropolis of Kraków and to the south the mountain area Beskid Mały.

Oświęcim is one of the oldest fortified cities in Poland. However, there are no sources to prove the city's origins and earliest history. About 1179, the office of mayor of Oświęcim by the Kraków prince Kazimierz the Righteous (Kazimierz Sprawiedliwy) was handed over to his brother son Mieszko Plątonogi, prince of Opole and lord of Racibórz. Ca. In 1272, the city was granted commercial property. In the division of the Principality of Opole in 1281, Oświęcim came under the newly created Cieszyn Principality. After the division of the Principality of Cieszyn, which took place between 1312 and 1317, the Principality of Oświęcim was established, which was independent – both in relation to Poland and the Czech Republic, and which was led by Prince Władysław. From 1327, however, Oświęcim had to accept Czech supremacy.
In 1457, the Polish king, Kazimierz Jagiellończyk purchased the Principality of Oświęcim, which thus became associated with the Polish crown through the king's person. From 1564, the former principality was formally incorporated into Poland as part of Kraków County.
At Poland's first division in 1772, the city came under Austria-Hungary, as part of the province of Galicia. In 1793, the Austrian Emperor granted Oświęcim confirmation of all previously granted privileges, and in addition granted the city the right to hold 12 markets annually. During a major fire in 1863, much of the city went up in flames.
After World War I – in the new Poland – Oświęcim from 1919 became part of Kraków County.
During World War II, in October 1939, part of Kraków County, including the cities of Biała, Oświęcim and Kęty, was incorporated into the German Empire. The concentration camp set up by the Germans in Oświęcim, in German: Auschwitz, received the first prisoner transport in June 1940: Polish political prisoners. This started the terrible human tragedy that was to take place in Oświęcim in the following years during the war, during which approx. 1.5 million people were murdered or otherwise killed in the camp. During the war years, the German occupation force carried out extensive movements of persons and expelled many Poles from their homes in the city and the surrounding localities. German residents and Volksdeutsche took over the empty houses and apartments. In 1941-42 a new camp was established in Brzezinka at Oświęcim, called: KL Auschwitz II – Birkenau, a camp in Monowice (KL Auschwitz III – Monowitz) and several sub-camps in and near Oświęcim. In the first year of the war, the German company IGFarben built a factory in Dwory near Oświęcim. That laid the foundation for the current Polish joint-stock company: Firma Chemiczna Dwory. In the last months of the war, the Germans sought to liquidate and evacuate the camp; In January 1945, gas chambers and crematoria in Brzezinka (Birkenau) were blown up. On January 26, 1945, the camp was liberated while the Soviet army occupied Oświęcim. Immediately after the German withdrawal, the German factory IGFarben was taken over by Polish authorities. In July 1947 the Oświęcim-Brzezinka State Museum was established in the area of the former German concentration camp.
Following the recent administrative reform in 1999, Oświęcim district (powiat) was established, which includes the municipalities of Zator, Kęty, Oświęcim, Chełmek, Przeciszów, Osiek, Brzeszcze and Polanka Wielka.

Castle of Oświęcim:
The castle is one of the best examples of medieval defense architecture and has preserved a tower dating to the transition between the 13th and 14th centuries; this tower is one of the earliest brick buildings in Małopolska. The listed building also includes a medieval tower with associated buildings from the 15th-20th century. as well as the entire area of the castle hill. The whole complex is a beautiful example of the architectural connection between the fortification and the other urban buildings. The princely castle is situated on a hill, which in pagan times was probably a cult site. The Gothic tower dates from the second half of the 13th century; the southern part of the castle can be dated to the 16th century. The castle has been destroyed by several fires and has been rebuilt. The buildings have been the residence of the bailiff since the princely residence (Principality of Oświęcim) and even later the seat of regional and municipal authorities. Now in the southern part there are historical and ethnographic exhibitions describing Oświęcim district.

The medieval town plan
in the old town from the 14th-15th centuries. includes the square and the narrow streets that were surrounded by an oval arch in the form of the former fortifications.

The Seraphic Sisters Monastery Complex
The monastery building (the first) was built in 1893-95 with classicist features; Initially the building was freestanding, but since then the connection to the church was established. The second monastery (infirmary) was built in 1950’are architecturally linked to the neoclassical style of the first building. Another part of the complex is made up of “Caritas“the Art Nouveau building from 1905-10 as well as two 1930's kindergarten buildings’s. To the east and west lies the monastery garden.

Salesian's Church Complex
The original Dominican Church – the Holy Choir Church – originated here in the first half of the 14th century. In the 16th century. it was destroyed by two fires (in 1519 and 1564). At the beginning of the 17th century. the building was partially rebuilt by the Dominican Order, but when the Swedes burned down the city and the castle in February 1656, the church and monastery were also severely destroyed. After the secularization, carried out after the decree of 1782, the properties of the order were put up for sale. The abandoned buildings went into disrepair. The property was later purchased for the purpose of founding an educational institution in the city. In 1898 the first salesmen arrived in Oświęcim; they began the rebuilding of the church. In 1901-02 the educational facility was built, which houses St. Jan Bosko’s name.

Saint Jacek’s Chapel
The last remnant of the Dominican monastery in Oświęcim is made up of the now free-standing St. Jacek Odrowąż’ Chapel. It is a former Gothic chapter hall (council hall) from the 14th century, which was rebuilt in 1594 to Saint Jacek’s Chapel. 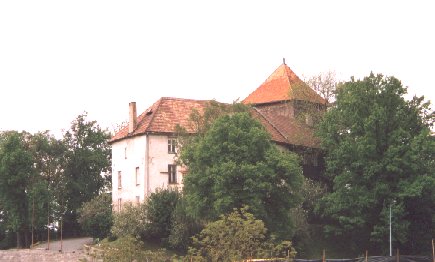 The castle of Oświęcim, whose oldest part – the tower – dates from the end of the 13th century.

Auschwitz concentration camp
Abroad, Oświęcim is today best known for its German name: Auschwitz and home to the most notorious Nazi concentration camp during World War II. The Auschwitz camp complex consisted mainly of 2 main camps, called KL Auschwitz I and II, namely: the concentration camp in Oświęcim itself and the extermination camp in Brzezinka (German: Birkenau), just outside the city. After the war, the two camps were designed as a state museum. The museum, which testifies to the conditions of the prisoners and the methods of extermination, is unique in its nature. Everyone who visits the southern part of Poland should also (at least once in their lives) pave the way for Oświęcim. 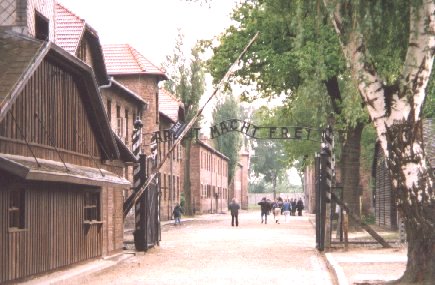 Literature and links to other pages about Oświęcim:

The literature on Oświęcim / Auschwitz is very comprehensive.
The camp museum has published several publications. The latest and most comprehensive fact book on the history of the camp is published in several languages. The German version is:
Auschwitz. National Socialist annihilation camp. Oświęcim, 1997. 491 pages, ill.
A smaller museum manager is:
Smoleń, Kazimierz: Auschwitz 1940-1945. Guide-Book through the Museum. Katowice, 1978. 119 pages. Later edition 1995. 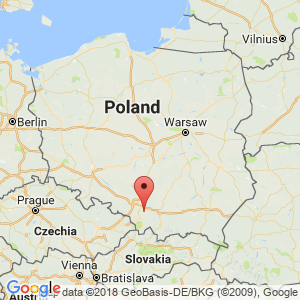