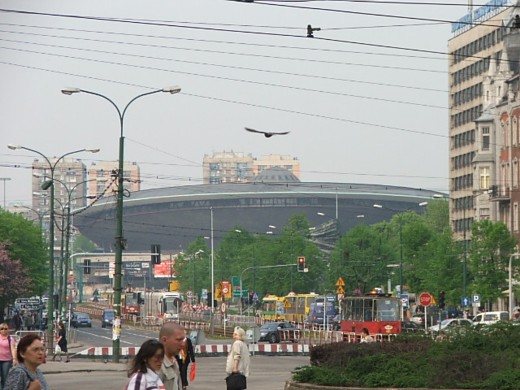 The Sports and Concert Hall in Katowice, called “Spodek”, seen from the square

The industrial town of Katowice is located in southern Poland as the main city in the Upper Silesian industrial and urban area, also known as Katowice Area . The city is the administrative and cultural center of the Silesian region, which includes Upper Silesia. Katowice is an important traffic hub, and the city houses many institutions of science and culture, such as universities and other colleges, theaters, museums and galleries.
The beginning of the present metropolis Katowice was the founding in 1397 of the Kuźnica settlement. However, a village named Katowice – which was then surrounded by forests – is mentioned only as late as 1598. In the 18th century. several labor colonies arose and ca. 1769-70 the prince of Pszczyna started a coal mine on the site. Later, several industrial companies emerged in Katowice, such as the metalworks “Hohenlohe” (1805), “Baildon”(1828) and the zinc plant “Wilhelmina” (1834). In 1839 Katowice became the seat of the extensive land owned by Franz Winkler. For the rest of the 19th century. more and more mines, metalworks and other industrial companies were built. Katowice was granted commercial property rights in 1865, and several neighborhoods quickly developed with dense buildings, rich townhouses and factory owners' offices. After World War I and after Poland's rebirth, three Silesian uprisings took place in the years 1919, 1920 and 1921. Following a vote in 1921, Katowice, together with part of the Upper Silesian industrial area, came under Poland. During the interwar period and after World War II, there was a tremendous growth, both in Katowice and the surrounding area. The cities of Upper Silesia grew increasingly together and created the unique, urban clustering in Poland that we now know as the Katowice area. Unfortunately, there were also negative consequences of the strong industrial growth in the area, namely increasing pollution of the environment. This relationship is now doing much to combat and the problem is far from as great as before. 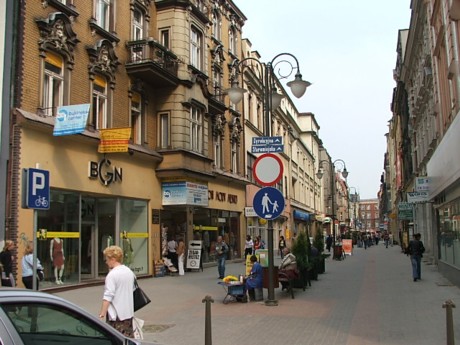 Ul.Staromiejska (pedestrian street) seen from the square to the east 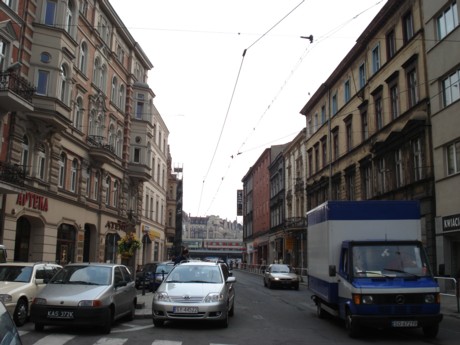 From the center of Katowice

Square:
The square in Katowice is not a typical place like the squares found in other and older cities. The square has a modern character and is a traffic hub in the city. Here are pedestrian areas with numerous shops, galleries and fashion houses. 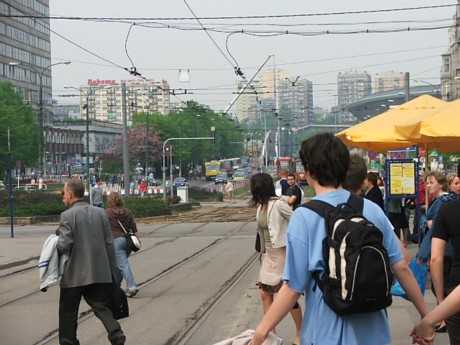 Wyspiański Theater:
At the square there is a theater named after Stanisław Wyspiański. The building dates from 1907. 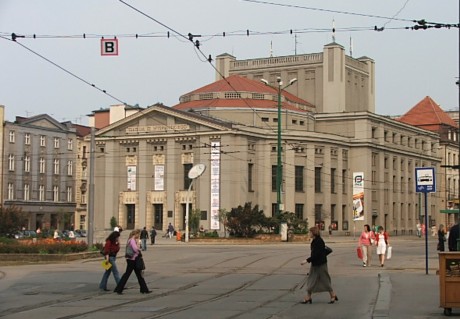 The Silesian Museum:
The museum is housed in a building from 1899. a valuable collection of Polish painting.
The County Sports and Concert Hall:
This hall was erected in 1962-71 and at that time considered one of the most outstanding works in recent Polish architecture. The upper part of the building resembles a plate or saucer and is popularly called “Spodek“that means just that. The hall, measuring 10,076 m2 and measuring 32 m in height, can accommodate up to 11,000 spectators. (See the image at the top of the page).
The memorial of the Silesian uprisings
near the Sports Hall is done by sculptor Gustaw Zemła.
The county administration building
arose in the years 1925-29 in a modernist style and was the seat of a.k.a. the Silesian Sejm. In the building, two halls are preserved in their original form: the Sejm Hall and the Marble Hall; they are interesting and rare examples of architecture from that period. 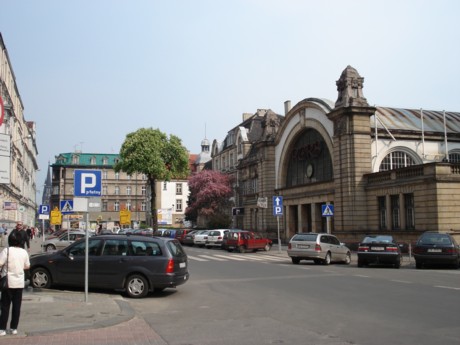 Ul.Dworcowa, on the right the old railway station building

The cathedral
is built 1927-55 with distinct classicist features. The interior of the church is very modern equipped.
Diocesan Museum (Muzeum Diecezjalne)
contains exciting collections including religious folk art, ornaments, sacrificial cups etc.
Museum of History of Katowice.
In addition to regular exhibitions, the museum gives lectures and organizes scientific conferences.
The Franciscan Order Monastery and Church
in Panewniki (on the southwestern edge of the city) from the beginning of the 20th century.
There are two major parks in the city:
Culture and Recreation Park
located in the direction of Chorzów and offering numerous forms of entertainment, as well
Kosciuszko Park
in the southern part of the city. 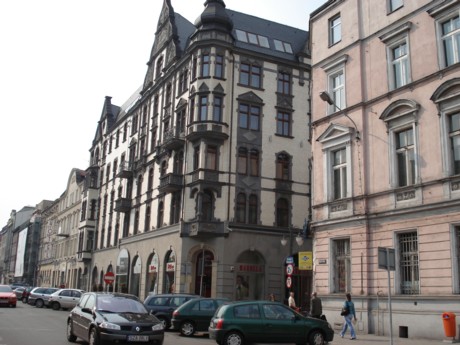 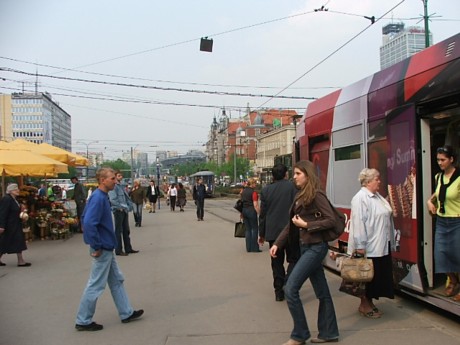 From the bustling square of Katowice

Katowice is on almost every side surrounded by large, densely populated urban communities; to the southeast Mysłowice, to the northeast Sosnowiec, to the northwest Chorzów, to the west Ruda Śląska, and to the southwest, the settlement extends all the way to Mikołów. To the south, however, there is a large green area, Katowice Forest Park. The A4 motorway intersects the city and leads east to Kraków, west to Opole, Wrocław and Legnica.
See: Katowice Area . 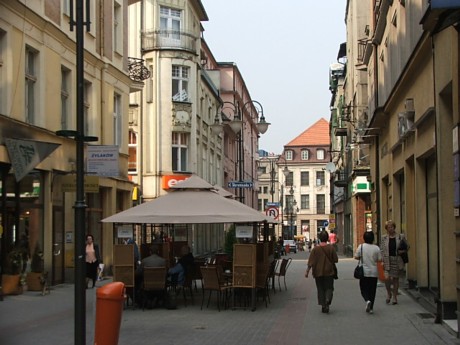 Ul.Dyrekcyjna (pedestrian street) seen to the north in the direction of ul.Warszawska; midway it is crossed by ul.Staromiejska 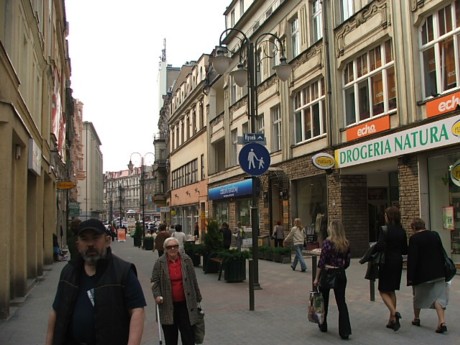 Ul.Staromiejska (pedestrian street) seen in the direction of the square

Katowice dla odmiany (The official site of the city in Polish, English, French and German)

Katowice is the friendship town of Odense Municipality in Poland. 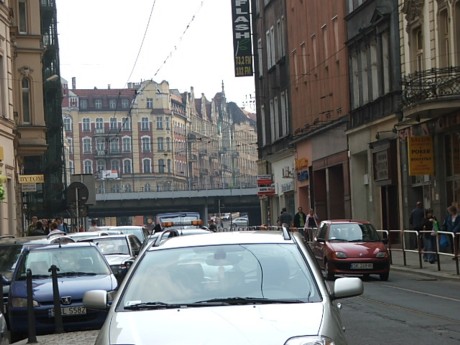 From the city center 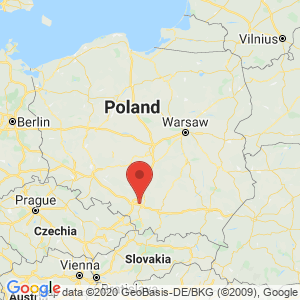